Liberia: West African Monetary Agency Distances Itself from Deceased ‘Liberian Diplomat’ Said to be In the Regional Agency’s Employ 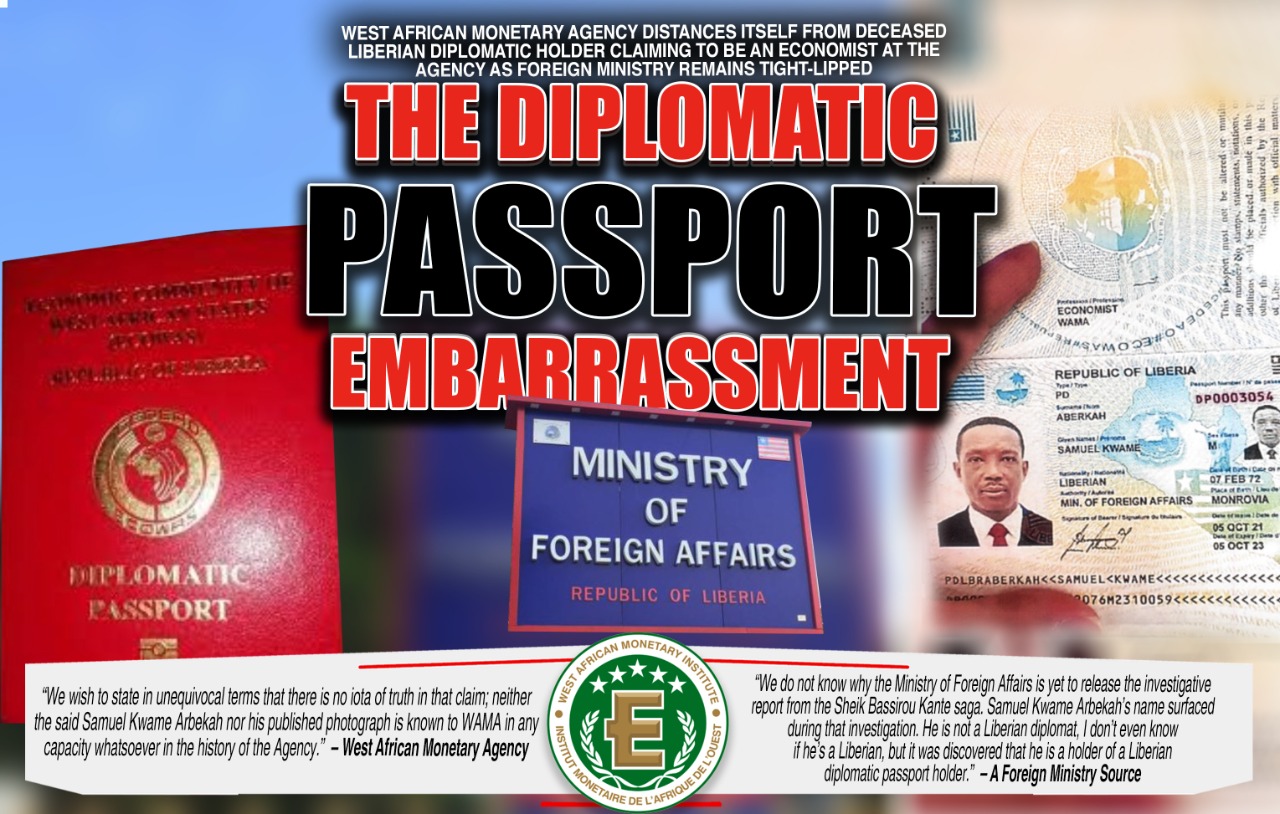 MONROVIA – It has been over 72 hours since FrontPageAfrica reported the commission of suicide by a Liberian Diplomatic Passport holder at the Istanbul International Airport, yet the Ministry of Foreign Affairs is yet to confirm whether or not the deceased was a Liberian diplomat.

Efforts applied by FrontPageAfrica to get comments from the Ministry proved futile over the past 48 hours.

However, what is even more embarrassing is that while the holder of the diplomatic passport numbered DP0003054, Samuel Kwame Aberkah, is listed in his passport as an Economist working with the West African Monetary Agency (WAMA), the Agency has distanced itself from him, clarifying there has never been an employee with the Agency with said name.

In a rejoinder to FrontPageAfrica’s publication, WAMA stated, “We wish to state in unequivocal terms that there is no iota of truth that in that claim; neither the said Samuel Kwame Arbekah nor his published photograph is known to WAMA in any capacity whatsoever in the history of the Agency.”

WAMA added: “Management of the West African Monetary Agency assures the peoples of the ECOWAS region of fidelity to its mandate and urges them to disregard any subterfuge calculated to or having the potential to denigrate the Agency or bring it into disrepute.”

According to information gathered by FrontPageAfrica, the deceased arrived at the airport with his wife and children in a taxi but was suspected of carrying drugs. He reportedly jumbled from a 25-meter-high height to escape security interrogation. FrontPageAfrica has not been able to independently verify that information.

However, diplomatic sources tell FrontPageAfrica that his body is being kept at the Arnavutkoy State Hospital in Istanbul.

How Did He Get the Passport

While the Ministry of Foreign Affairs here in Liberia is tight-lipped on the saga and also refusing to confirm or deny whether the deceased was indeed a Liberian and a diplomat, FrontPageAfrica has gathered that the diplomatic passport he carried was fraudulently obtained.

“Liberia has no diplomat by that name. in fact, when the Sheik Bassirou Kante’s investigation was being conducted, his (Samuel Kwame Arbekah) name surfaced as one of those who had a diplomatic passport obtained illegally,” the source said.

The source continued: “We do not know why the Ministry of Foreign Affairs is yet to release the investigative report from the Sheik Bassirou Kante saga. Samuel Kwame Arbekah’s name surfaced during that investigation. He is not a Liberian diplomat, I don’t even know if he’s a Liberian, but it was discovered that he is a holder of a Liberian diplomatic passport holder.”

In April this year, Kante alias Royal Gold, a popular businessman in Liberia was arrested in the United States for wire fraud amounting to over US$7 million but could not secure a bail bond as the court took into consideration several factors, including his possession of a Liberian Diplomatic passport and his very close ties with the Liberian government.

Sheik Bassirou Kante was arrested at his home in the United States on April 20 and was duly charged with money laundering conspiracy. He was picked up just a few hours before his scheduled departure from Dulles International Airport in Washington to the United Arab Emirates on a one-way ticket.

On May 10, President George Weah directed the Minister of Foreign Affairs, Dee-Maxwell Kemayah, to immediately investigate circumstances leading to the issuance of Liberia’s Diplomatic passport to Sheik Bassirou Kante.

In his directive, the President ordered that the Ministry of Foreign Affairs immediately stop the issuance of diplomatic passports to anyone unless otherwise authorized by him.

The Liberian President also directed Minister Kemeyah to submit a full report detailing a review of how Liberian diplomatic passports are issued.

The report by the Foreign Minister was to be submitted within one week of the date of the President’s directive, May 10, 2022.

However, it is yet to be submitted since the mandate.

In August, Min. Kemayah, said the absence of Sheik Bassirou Kante, a person of interest, is stalling the investigation into the illegal distribution of Liberian diplomatic passports.

Kemayah: “You will agree with me that the investigation even becomes inconclusive if you don’t directly or indirectly have access to Sheik Bassirou Kante to answer questions,” Kemayah said.

In reaction to the State Department’s action, the Liberian government issued a writ of arrest for Wonplo who reportedly decided not to return to Liberia after the denial of his entry.

Rejoining to the writ of arrest, Wonplo opened the can of worms – alleging that passports issued under his watch were done with the approval of some senior officials in the George Weah-led government, he says were part of a syndicate granting diplomatic passports to foreign nationals.

Mr. Wonplo, released a damning audio recording reiterating his innocence, just days after US Secretary of State Michael R. Pompeo at the time announced his public designation due to his involvement in significant corruption.

The US Secretary of State noted that Mr. Wonplo, in his official capacity at the Ministry of Foreign Affairs from 2018 to 2019, was involved in passport fraud that undermined the rule of law, reduced the Liberian public’s faith in their government’s management of identification and travel documents, and compromised the integrity and security of immigration processes.

In his recording released, Mr. Wonplo said Liberia is sitting on a time bomb because of the syndicate he said that includes top officials in the government. “Liberian people, Liberia is on a time bomb and this is a very serious problem. People around here don’t want to come up with the truth. So, basically, that’s how these guys ganged up against me based on my refusal to be corrupt, then people there pointing hands at me today. With the kind of character, I build up over the years.”

Mr. Wonplo accused associates of President Weah of trying to ruin his still-young life. “I’m still young. Politically, I’m still young – and I’m yet to make headway. I will not sit there and join a cartel that will damage my political future in this country. I will never allow this to damage my future – and that’s the reason why I’m not running from this Liberia.”